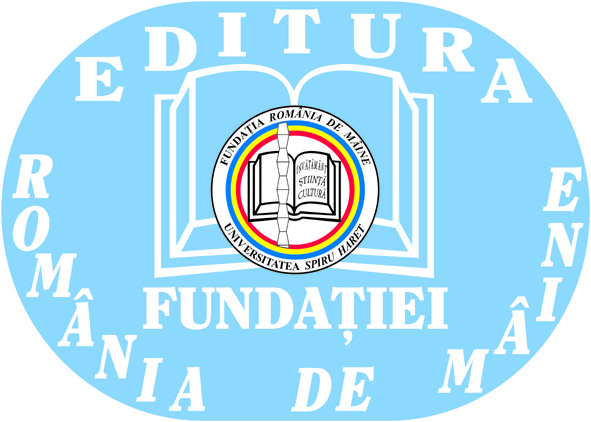 The Publishing House of România de Mâine Foundation was specially designed for a didactic-university profile and a rich editorial register consisting of courses, textbooks, course materials, syntheses, compendiums, monographs, treatises, albums, practice notebooks and many other materials, for all stages of university education, which come to the aid of students or specialists in many fields of activity.

The founding principle of the publishing house’s activity, on the basis of which its programs and strategies are elaborated, is the attraction to study, the professional development of the new generations, as well as their intense preparation, by modern methods, latest information, rigorous and substantive explanations regarding real economy, in conditions of competitiveness. The quality of editorial production is confirmed both by the prestige and scientific authority of the authors whose names can be found on the covers of published books, as well as by the professionalism of entire editorial team. Between 2015 and 2020, the publishing activity materialized through the appearance of over 700 titles, in a total circulation of over 184,000 copies. The main purpose of Publishing House of România de Mâine Foundation remains the dissemination of culture and scientific research from and to valuable people, with high intellectual status, true moral models of contemporary society. Thus, the publishing house focused from the beginning on the publication of extracurricular volumes,which would complement the students’ knowledge and, at the same time, address professionals and readers passionate about those fields.

The impact of published titles can be quantified by the growing interest of readers, the increase in the number of requests for republishing and, last but not least, the rapid depletion of works of scientific interest, especially in the humanities.

The portfolio of the Publishing House of România de Mâine Foundation also includes many areas of the socio-humanistic field, such as: Philosophy; History; Sociology; Psychology; Journalism; Communication and public relations; Communication sciences; Cultural studies; Geography; Romanian Language and Literature; Foreign languages and literatures; Architecture; Performing arts in theatre; Pedagogy; Music pedagogy etc. In each of these areas, the editorial activity is aimed at refining the texts and content, based on documentation and uninterrupted contact with authors or groups of authors, so that the necessary information is not only thorough and quality, but also accessible to all categories of readers to whom it is addressed.

The field of Philosophy within the Publishing House of România de Mâine Foundation was given a special attention, being selected valuable works signed by important names that focused on this area of knowledge. An argument in this regard is the establishment, in 2014, of the collection Studies and essays in philosophy (https://editurafrm.ro/studii-si-eseuri-de-filosofie-colectie/), which has already reached a number of nineteen publications that were presented in dedicated symposia (we mention, conferences held within the partnerships and round tables held at book fairs; we also emphasize the presence, in 2019, at the Paris Book Fair (at the stand dedicated to the Romanian Publishers’ Society).

Among the titles from our important collection „Studies and essays in philosophy” can be discovered (each book has an English presentation):

The distribution of the published volumes is done through a large book distribution network that means own libraries, bookstores and points of sales, but also by collaborating with different distributors and bookstores, such as Cărturești, librarie.net or Bibliostar. Also, a large number of our books are distributed through the online bookstore that completes the website of the Publishing House of  România de Mâine Foundation (www.editurafrm.ro), from where deliveries are made regularly, by courier companies.

Another concern of the Publishing House of România de Mâine Foundation  has been and will remain in the future, the initiation and development of international cooperation with similar institutions and organizations from other states, especially from the European Union. Thus, during 2019, an Agreement was signed with the Istituto TESEO in Rome on the reciprocal right to translate works that will be made available by both parties, within a cultural exchange program. Since then, the first three titles in the program have been translated and published, translated into Italian, by the TESEO Institute Publishing House: The meaning of philosophy in human spirituality. The identity of Romanian philosophy, author Ion Tudosescu; A star on the Romanian sky – Queen Marie of Romania, author Nicolae Mareș; Romania under the Sign of the Fire Rooster, author Mircea Coșea. During the same period, the Publishing House of  România de Mâine Foundation published the Romanian translation of the volume Ca frunzele în vânt/Floating like leaves in the wind, signed by a group of authors coordinated by Stefano Amodio, from Istituto TESEO.

The agreement with the TESEO institute also includes the following directions of action: the organization of conferences to promote books and their subject, both in Romania and in Italy; the launch of a joint publication, edited by both parties, given that Spiru Haret University already has thirteen recognized journals in international databases; the publication of submitted articles written by Italian authors, recommended by the Italian Institute to be published, depending on the scientific area of which they are part, in the thirteen publications of the University of Romania; harmonization of common areas of activity, with a view to rapidly increasing the number of volumes to be published by the two signatories to the agreement. The contract also provides, for the year 2021, the completion of a joint project of a Summer School whose courses will take place in both Romania and Italy, supported by the infrastructure provided by the two signatory institutions, but also the support asset of the Romanian-Italian Chamber of Commerce. As a result, young Italians will come to study in Romania and, based on reciprocity, young Romanians will study in Italy.

The Publishing House of România de Mâine Foundation creates links for the initiation and development of long-term thematic collaborations with the publishing houses of other universities in Europe or in other cultural spaces, based on the principle of multiculturalism and tolerance.

An extremely important place in the publishing house’s activity regarding the research fields is the Annals of the Spiru Haret University, publications that appear quarterly, where works published under the auspices of the publishing house are promoted. Equally, special attention is paid to the collections of scientific communications of specialists, teachers, doctoral students, master students and students, in order to ensure the connection of the editorial policy with the real evolution of currents and orientations in the field.

In order to ensure an exceptional graphic quality, in the vicinity of the publishing house, România de Mâine Computerized Printing Complex operates, consisting of offset and digital printing, graphic and text editing, DTP, computerized word processing, prepress, digital and modern and fast finishing lines, which ensure the printing of university textbooks, course materials, auxiliary teaching materials and, in general, any works requested by the publishing house or other component entities of the Publishing House of România de Mâine Foundation, such as the weekly magazine Opinia Națională, the Radio station „7” or third parties.

We are confident that the activities carried out by the Publishing House of România de Mâine Foundation will be crowned with success, and it will materialize even by enrolling the publishing house in a superior category, which corresponds to everything it undertakes in good faith and innovative spirit.